For a directory of people buried in the Church cemetery, click here.

For information regarding the layout of the Marak cemetery, click here.

To see the deed history of the Marak cemetery, click here.

History of the Marak Church written in 1939: 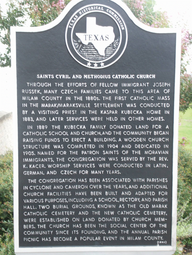 ​A History of a Small Country Church

Sts. Cyril & Methodius Catholic Church is located in a small Czech farming community and is the heart of the area that brings the population from several neighboring towns together.

Through the efforts of fellow immigrant Joseph Russek, many Czech families came to this area of Milam County in the 1880’s. The first Catholic mass in the Marak/Maraksville settlement was conducted by a visiting priest in the Kaspar Kubecka home in 1883, and later services were held in other homes.

In 1889, the Kubecka family donated land for a Catholic school and church and the community began raising funds to erect a building. A wooden church structure was completed in 1904 and dedicated in 1905. Named for the patron saints of the Moravian immigrants, the congregation was served by the Rev. K. Kacer. Worship services were conducted in Latin, German, and Czech for many years.

The congregation has been associated with parishes in Cyclone and Cameron over the years, and additional church facilities have been built and adapted for various purposes, including a school, rectory, and parish hall. Two burial grounds, known as the Old Marak Catholic Cemetery and the New Marak Catholic Cemetery, were established on land donated by church members. The church has been the social center of the community since its founding, and the annual parish picnic has become a popular event in Milam County. 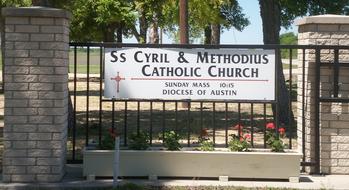